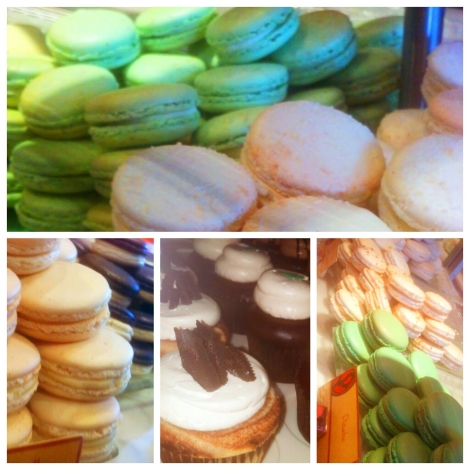 1. How to describe all that is catching up? I’m pretty much catching-up on everything: time at the gym, healthy eating, job applications (still), apartment cleaning. Life. Current job work was beyond busy this past month so many things fell off the radar. Luckily, though, the busy-ness put some perspective on things — mainly reaffirming that I’m good at my job. I know I can bring a lot to a new place. This is keeping me going as the job hunt (part 9248) continues.

2. I have a bunch of posts in the queue, but, given that we’ve just had a good holiday, I wanted to post the above picture. It looks scrumptious, doesn’t it? All photos are from Sweet Lobby, a little joint near my hood that sells macaroons, cupcakes, and macaroon-topped cupcakes. Yum. They only had green and white this weekend for St. Patrick’s Day. I was a little bummed, since I was there to get a bunch of colorful macaroons for a friend’s tea party birthday party (yes, it was as fun as it sounds). I drowned my sorrows in a vegan carrot cupcake. All is well.

3. I’m almost coming on a year living in the new apartment. Who’d have thought I’d ever make it out of the undergrad area, but I did it! And a year later, and it still feels like I’m not 100% settled into the new place. I don’t know if it’s because I’m getting old and am hoping for a more “grown-up” apartment or what. It could also be due to the fact that I have no idea what a true “grown-up” apartment entails. Hence, a continuous unsettled feeling. In the mean time, I bought a new drying rack for clothes that actually folds up enough to put in the closet. Baby steps.

4. Healthy eating, take 2, is on this week. The official, sign-up for generic diet, program did not work. I’m shocked. Not really. But, in this mess of food, I’ve realized that I know how to eat properly; what’s good for me and what isn’t. I can totally do this on my own. Ya know that feeling of being on the high-dive at the community pool before jumping? That’s this. Stay tuned.

5. Gym time, on the other hand, is great! I’ve made this a priority in the past couple months. Granted, I still have my mornings where my well-intentioned work out falls to the wayside, but it’s still happening during the week.